The game might have lasted 80 minutes, but the Roaring Fork High School Ram soccer boys’ 3A state title was years in the making.

It started with the Roaring Fork Soccer Club, and parents willing to drive their kids to matches hours away. Former Colorado Rocky Mountain School player Nick Forbes could see that when he took over as head coach of the Rams nine years ago.

“The technical level that we’re getting from our club and the amount of energy the community has put into these boys and their soccer — there was a good foundation to build on,” he said. “It allowed me to focus more on tactical and situational play. And each year I get a little better at my job.”

Indeed, each year the team made it a little deeper into the playoffs. And, though crushing, the 5-0 championship loss to Kent Denver in 2019 may have been an essential element of their eventual victory.

“Almost everyone that was on this team was at least on the bench or on that squad,” Forbes noted. “I think experience shines through in those big nerve-wracking games, and there’s also the motivation of not letting that happen again.”

But their comeback, like so many things, was postponed by COVID. The 2020 boys soccer season ended up delayed until this spring, and the fatigue of a strange school year took its toll on both school and sports.

“We started kind of slow. We lost the first two games before we started to build some real momentum, and by then we’d already dug ourselves a hole,” Forbes said. “You learn a lot from losing, too, and I think that experience was really good for the boys.”

When a new, relatively normal season began just a few months later, he began to think this might be the team.

“When we needed to, we dominated every team we played,” he said. “I think people may have underestimated us a little bit going in as the 11th seed, but I like being the underdog.”

The playoff bracket was, as usual, dominated by Front Range private schools but, while they often managed to get the first point on the Rams, the final scores spoke for themselves: 3-1 vs. Bishop Machebeuf at home, 5-1 against Prospect Ridge Academy, 3-2 over Faith Christian in the quarterfinals and 3-1 against Atlas Preparatory School in the semis.

So, even the final game against the 18-0-1, top-seeded Jefferson Academy on Nov. 12 was far from a David and Goliath story.

There were plenty of Roaring Fork fans in the stands at Weidner Field in Colorado Springs. And, although the Jaguars managed to nab the first goal, the Rams held firm. Senior Iverson “Ivy” Ortiz answered with a goal of his own just before halftime. Returning from the break with a tied score, both teams turned up the heat and the fouls started flying, but without any points to show for it. It was sophomore Josh Hernandez who gave Roaring Fork its second point with 15 minutes left in regular play. After that, it was just a matter of playing defense ‘til the clock ran out. 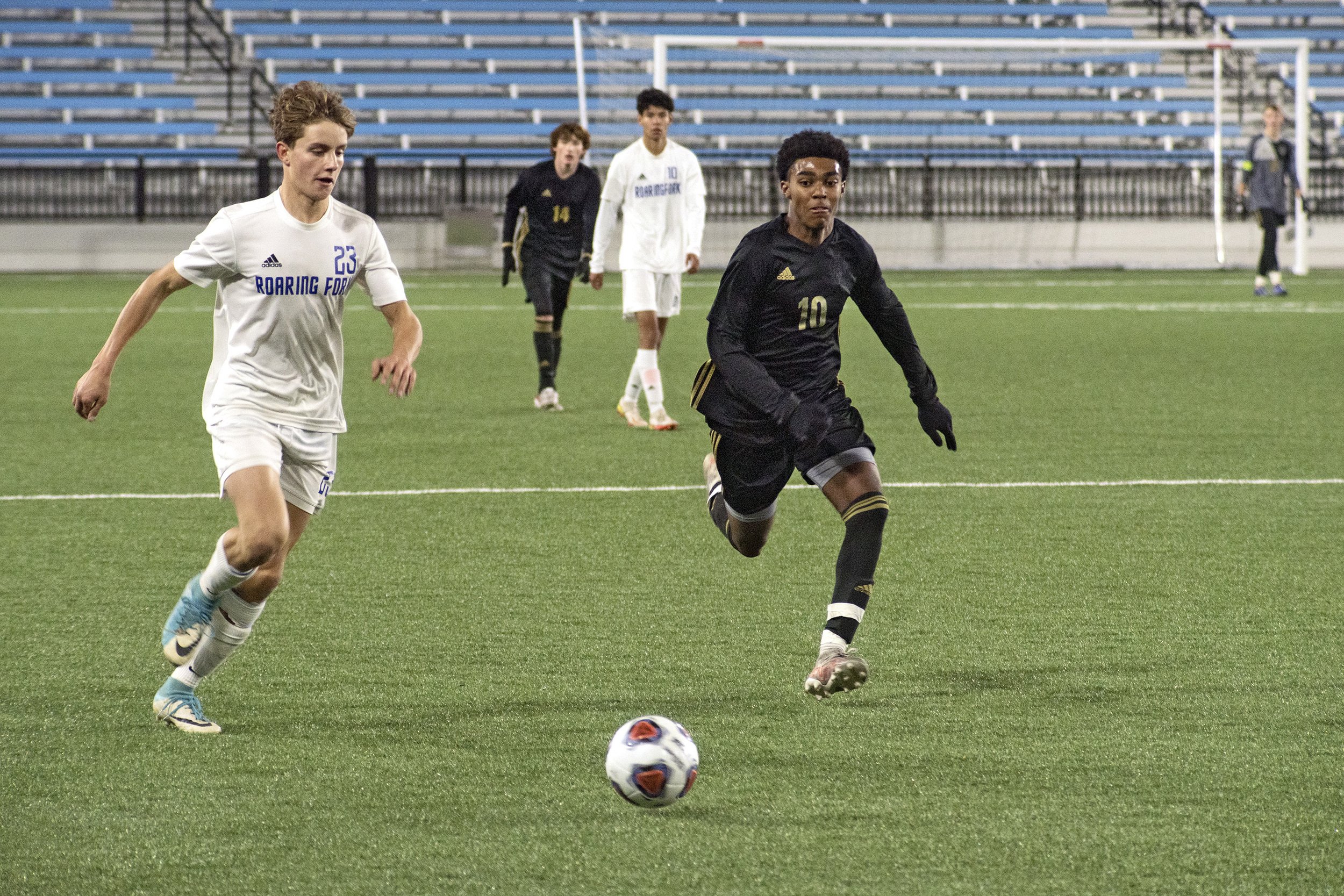 Photo by Will Grandbois.

“The first half, our backs were against a wall. They didn’t give up, they kept playing the way we wanted to play,” Forbes said. “We had to ride our luck a little bit, but I’ll take it.”

Asked to highlight some stand-out players, he ended up listing almost his entire playing team.

“Our backline has kind of done this unheralded work all year,” he said. “They had a monster game shutting down some very, very good attacking players.”

On the scoring front, junior Emiliano Magana leads in goals per game while Giancarlo “Carlos” Perez contributed plenty of assists. And, in Forbes’ estimation, it all starts with center-mids Jose “Jr.” Mercado and Ross Barlow, both seniors.

“It kind of gets drowned out in the glory, but it’s kind of crazy that the last four years of soccer came to an end,” Barlow observed.

Other departing seniors include Braden Stainton, Salvatore Lepe, Jacob Martin, Cole Pargiter-Walker, Giancarlo “Carlos” Perez Rios and Aaron Verla. But top scorer Emiliano Magana is a junior, and wingers Josh Hernandez and Max Brooke should be sticking around, as well.

“I’ve already been watching our JV and coaching them, and I think we’re gonna be able to put together some more runs,” Forbes said. “You need some luck and you need some bounces, but I don’t see us dropping a level anytime soon.”

That’s quite the legacy for a school that hasn’t clinched a state title in any sport since the ‘89, ‘90, ‘91 girls’ basketball “threepeat.” Though the return of the varsity American football means there probably won’t be many soccer games under the Friday night lights, the team still enjoys growing community support and attendance. Forbes is thrilled to see the most popular sport in the world seeing such success locally.

“We have kind of a Latino community and an Anglo community, and for me, watching the kids play soccer, it kind of bridges that gap,” he noted.

Said Perez, “We’re a team — a family. We love each other, and we play for each other.” 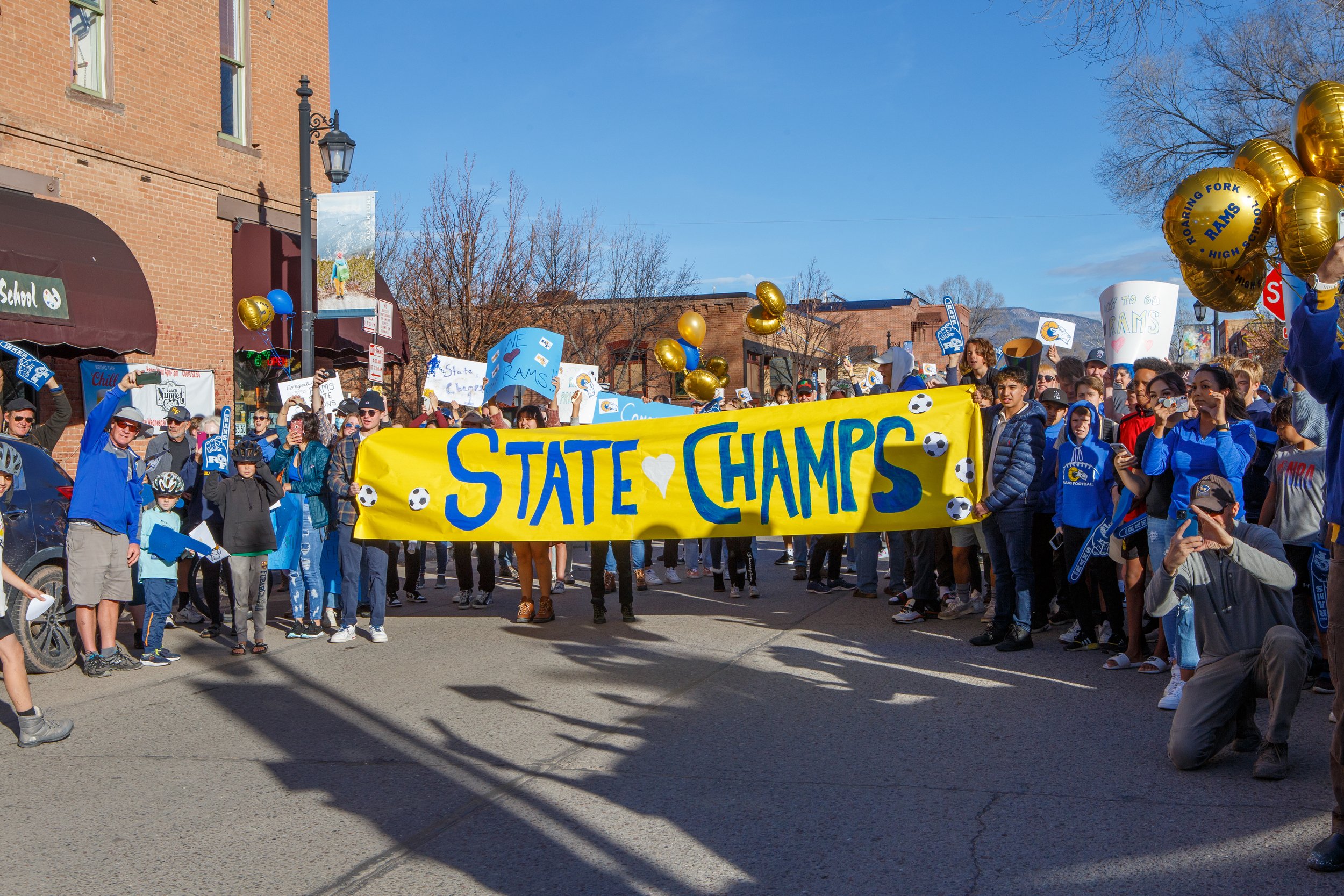 The Roaring Fork High School boys soccer team received a warm, boisterous welcome upon returning home from the 3A state championship game. Family and friends and admiring fans lined Main Street with noise-makers and other signs of affection on Saturday, Nov. 13, to celebrate the Rams’ victory against the Jefferson Academy Jaguars. Another victory parade, with police escorting the champions through Town, was held on Monday, Nov. 22. Photo by Sue Rollyson.