Every migrant, wherever they are, matters

In this Valley, it’s likely that everyone knows or is acquainted with someone who was not born in the U.S. and does not have legal residency status. As author Francisco Cantú puts it, “The border reaches into every community.”

For its annual fundraising benefit on Sept. 7, local nonprofit English In Action (EIA), invited Cantú and Ali Noorani, an immigration policy expert and author of “There goes the Neighborhood: How Communities Overcome Prejudice and Meet the Challenge of American Immigration”, to come together for the first time and discuss one another’s books in front of a live audience at the Aspen Art Museum.

Before the authors took the stage, Paulina Navas, who was recently hired by EIA as their digital literacy coach, spoke about her experience coming from Columbia to the Valley in 2017. She opened with a quote from Mother Teresa, “We ourselves think that what we are doing is just a drop in the ocean, but the ocean would be less because of that missing drop,” signifying the importance of every individual, and every relationship.

Navas shared with the audience how she and her husband had to flee Columbia due to “security issues” around her husband’s work. “We had to leave our country and start our lives from scratch, including the language, in a country where we did not know a single person.”

Navas described a sense of loneliness when they first moved to the U.S., which was chipped away at thanks to EIA. Navas has been partnered with her tutor for, “more than four years, and we are going for more,” she declared. “Our tutors are not only our counselors or mentors. Our tutors have been and will be our friends and, in effect, our USA-based parents.”

While attempting to overcome her emotions, Navas told the crowd what her parents had once told her, “Persevere, Paulina.” While Navas’ experience is unique, a similar tale is shared by millions. 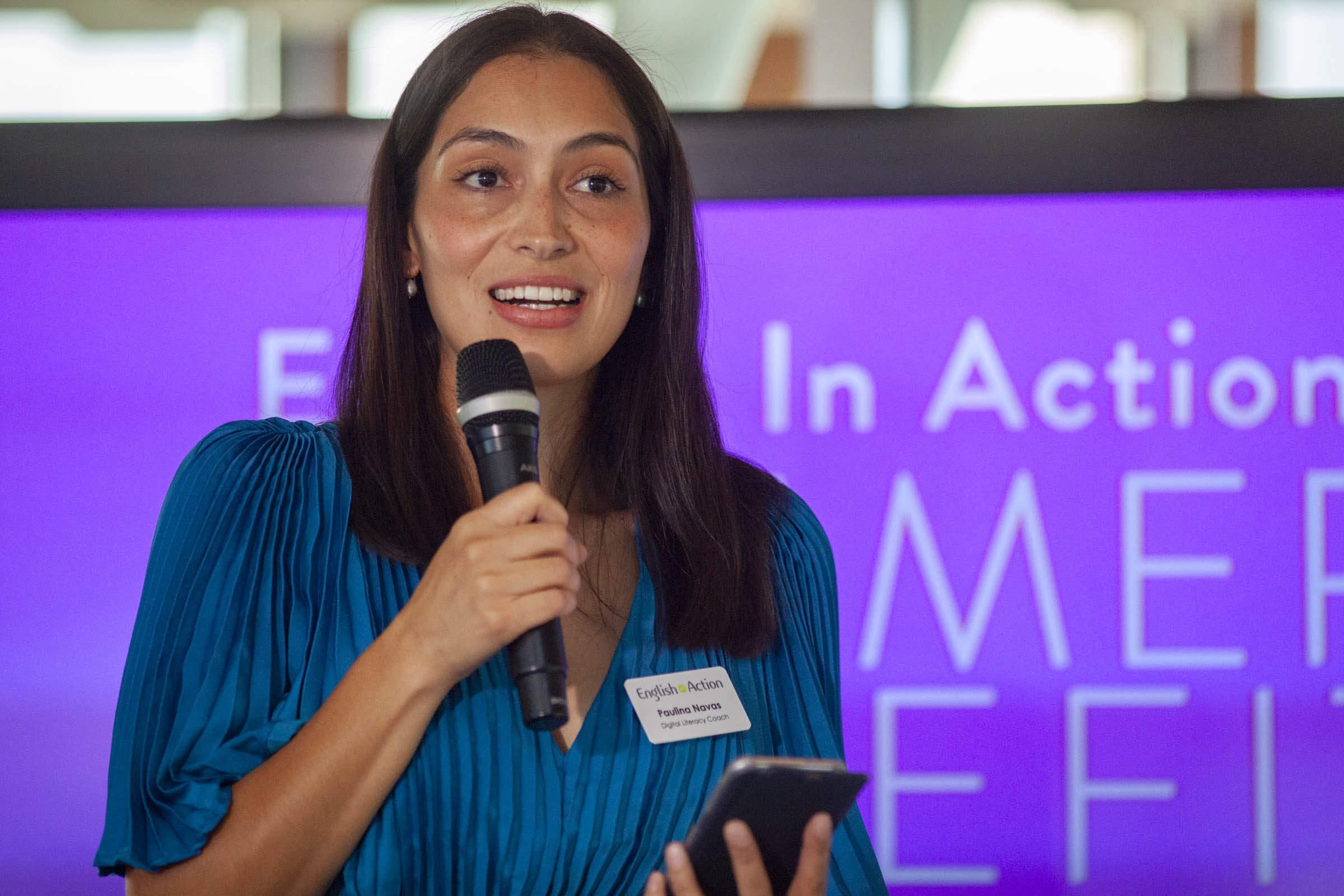 In his book, “When a Line Becomes a River: Dispatches from the Border”, Cantú pays tribute to the scores of people unaccounted for. Many have fatally failed to make it across the U.S.-Mexico border, or have been stripped of life and identity by narcos (drug cartel members).

Cantú drew a comparison to what WWII historian Timothy Snider wrote regarding the genocides in Germany and Russia, urging that, “It is for us, as humanists, to turn the numbers back into people.”

Cantú is his mother’s maiden name and their relationship comes up frequently throughout the book. She intended for Cantú to know his roots. His grandfather, on his mother’s side, was born in Monterrey, Nuevo León, Mexico around the time of the Mexican Revolution. Cantú’s great aunt would tell the story about taking the train with her family, and Cantú’s father (only a baby at the time), to escape the impending turmoil. Cantú’s mother was born in the U.S. and later, so was he.

When Cantú was young, his mother took him to the U.S.-Mexico border. They crossed effortlessly through border-security from El Paso to Juárez. He notes in his book the good nature of the Mexican people in Juárez. Later in the book, he informs the reader that in 2010, Juárez was considered the “murder capital of the world” while, during the same period, the northern, and virtually connected, city of El Paso was named the safest city in the United States. 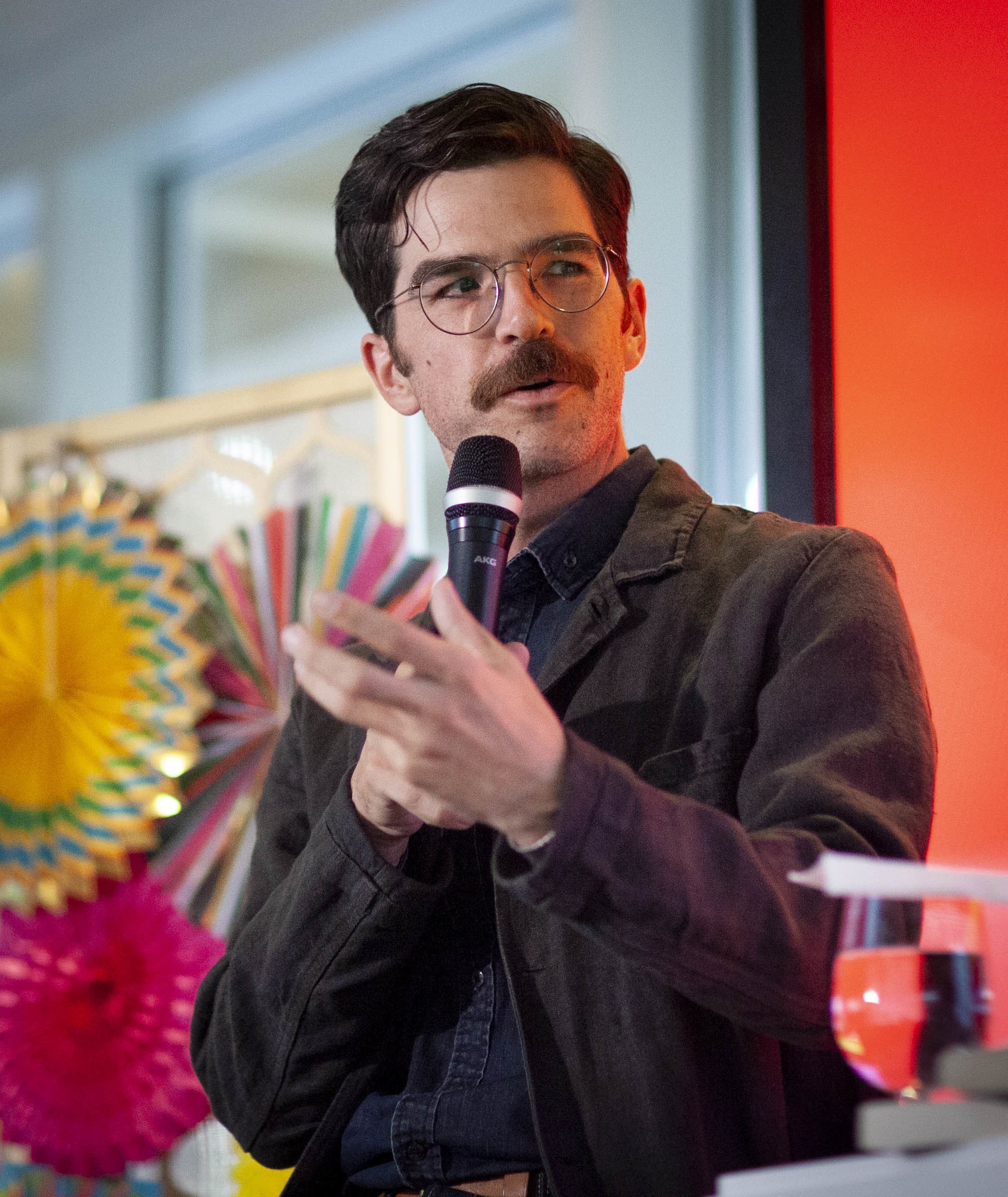 Cantú’s book lays out his experiences as a field, and later intelligence, agent with the U.S. Border Patrol. His eyes were opened to the incredible, and often fatal, hardships people faced attempting to cross the border. However, the story culminates after he had left the Border Patrol and was working at a coffee shop. There, he befriended a man who worked as a janitor in the same building and who ended up in deportation proceedings after being caught trying to reenter the country.

After nearly a decade of journeying through a system where deportation is the fate of millions, a friendship with one person facing the same fate resonated with the author in a whole new way.

To Cantú, that is why organizations such as EIA are so valuable. The mainstay of the nonprofit is the one-on-one tutoring program, where an English language learner is teamed up with an English speaker. The purpose, of course, is to learn English, but another intended consequence is that the pair will become life-long friends and get to know each other and their respective families.

Since publishing his book, Cantú has spent time volunteering with folks in custody at an immigration detention center. The people he interacts with are mostly asylum seekers, waiting for a ruling on their petition. He currently teaches at the University of Arizona and organizes a program that takes students to the border every summer. “That is my way of staying abreast of what’s going on,” he stated.

“A lot of times we just pay attention to what happens at the port of entry,” said Cantú, “but the more time you spend down there, the more you realize how it affects an entire terrain, an entire region and alters the landscape and how people move through space and the kind of lives they are able to have.”

Reaching across the aisle

“What I think is fascinating about Ali [Noorani] is that he is somebody that has difficult conversations across the aisle, all the time,” said Cantú. He added that Noorani’s book highlights, “When somebody has a personal relationship — and I think this really ties into this organization, EIA — with a migrant or somebody who is directly affected by border issues, I think it very quickly changes their outlook and it becomes harder to ‘other’ that group of people when you know somebody from that walk of life.”

Of Cantú’s book, Noorani stated, “It really wove together the story of migrants, the people who chase migrants and the policies that make it terrible for all of the above.”

Noorani is the Executive Director of the National Immigration Forum, out of Washington D.C., which brings “together moderate and conservative faith, law enforcement and business leaders to weigh in with media and policy makers in support of practical and commonsense immigration, citizenship and integration policies.”

“Our theory is that we always want to bring in the voices and the perspectives that are kind of missing from the debate,” said Noorani, “because ultimately, you’ve got to move Republican lawmakers and they’re going to listen to the people that voted for them.”

“I think the most important thing to do is volunteer or serve at an organization like EIA,” said Noorani, “but also to tell the story about how immigrants are contributing to communities, whether it’s Carbondale, Aspen or anywhere in-between.”

Noorani has another book coming out in the spring called “Crossing Borders: the Reconciliation of a Nation of Immigrants”. In it, he writes about “how the migration debate around the world is weaponized to harden borders so that people are pinned against borders and used as political pawns,” Noorani told The Sopris Sun. “Then the question is, ‘how do you help people understand migration and borders in a different way?’”

EIA’s Spet. 7 benefit brought in more than $400,000 for the organization to further its mission in service to the local migrant community.