Coalition grapples with climate pollution at local defunct mine

Redstone used to be a coal mining town. From the 1950s until the early nineties, Mid-Continent Resources extracted coal from several mines in Coal Basin. Some reports say the company produced in excess of 21 million tons of coal.

These days, the Crystal River valley boasts a scenic drive, a clear river, hot springs, mountain homes and public lands full of recreators. The mining history is easily ignored. But the polluting legacy of this mining complex, which measures approximately four miles long and two miles wide, lives on.

According to a summary assembled by the Community Office for Resource Efficiency (CORE), scientist Chris Caskey and Aspen Skiing Company (ASC), the coal mines above Redstone currently vent an estimated 1.3 million cubic feet of methane per day — more than the emissions of Pitkin County’s residential energy, commercial energy, transportation, aviation and waste combined.

On the morning of Aug. 16, a coalition that has been discussing how to deal with this ongoing climate pollution gathered in Redstone Park to present their work to Senator Michael Bennet. The group, consisting of staff and officials from local nonprofits, government and private organizations, sought to bring Senator Bennet up to speed on the bureaucratic hurdles that make projects like this one difficult to accomplish.

“We’re urging [the senator] to continue to move the CORE Act forward, and then to even look at new legislation that would support coal mine methane capture all around the country,” explained Mona Newton, executive director at CORE, a climate action organization that is acting as an organizer for this project. According to Senator Michael Bennet’s office, the Thompson Divide Withdrawal and Protection Act, which is part of the CORE Act, includes “provisions to allow methane capture in Garfield and Pitkin counties … Specifically, the bill creates a pilot program to lease and generate energy from excess methane in existing or abandoned coal mines.”

Methane in the atmosphere traps heat, and it traps heat better than carbon dioxide. According to the United States Environmental Protection Agency (EPA), the impact of methane is 25 times greater than carbon dioxide. The gas is commonly found in coal mines, as the extraction of coal breaks up the earth and releases the methane trapped underground. According to the Colorado Energy Office, the mines near Redstone are some of the gassiest in the state. 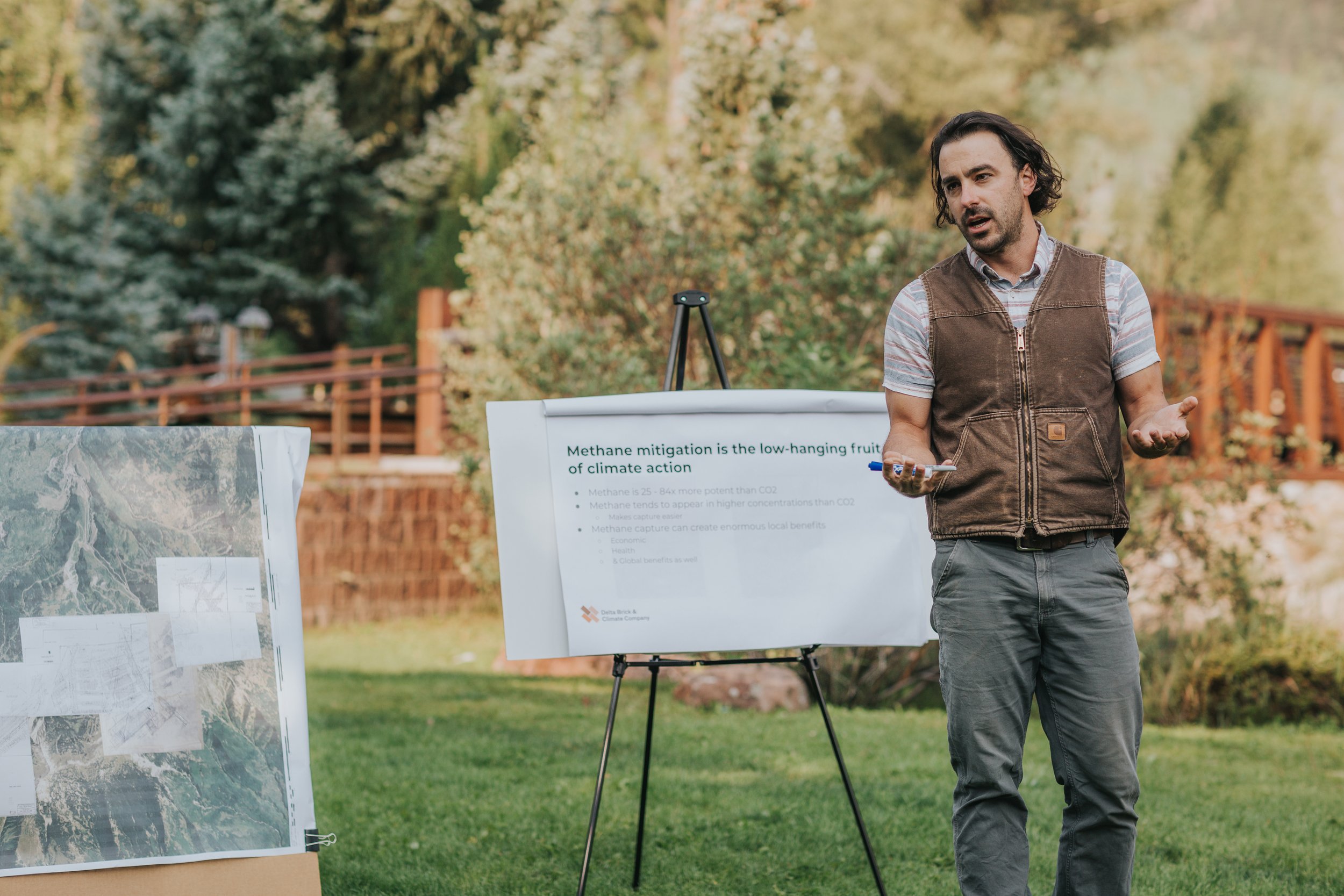 Chris Caskey, a local scientist, provides technical expertise to a coalition interested in dealing with pollution at abandoned coal mines near Redstone. Photo by Olivia Emmer.

The easiest way to reduce methane pollution from a mine is to burn it. Just down the road, in Somerset, a plant is running at the Elk Creek Mine that burns methane and uses it to create electricity. “That plant puts as much energy onto the grid with Holy Cross as [Aspen Skiing Company’s] annual energy consumption across our hotels, resort and operations.” That’s according to Hannah Berman, senior manager of sustainability and philanthropy at ASC. That plant doesn’t produce electricity at a competitive price, but, after about 10 years of operation, it’s approaching a break even point while also lowering climate pollution. According to an ASC report, that plant has prevented 250 billion cubic feet of methane annually from being emitted, equivalent to taking more than 500,000 cars off the road for a year.

Burning methane still produces carbon dioxide, but since carbon dioxide is a less powerful greenhouse gas, it’s a net-positive for the climate. Rough estimates by Caskey, based on the amount of coal removed from the Mid-Continent mines and the amount of methane likely to have leaked, suggest it’s possible the climate impact of the venting methane may be comparable to that of the extracted coal.

The waste methane from Redstone’s mines could theoretically be used on-site to generate electricity, and the transmission lines that previously brought power to the mine still exist. Holy Cross owns those lines and maintains them to add resiliency to their power grid. According to Chris Bilby, a research and programs engineer at Holy Cross, “I think there’s enough power there, capacity-wise, to run the Crystal Valley.” While Bilby stressed that Holy Cross sees their future in wind and solar, this project is still of interest because it makes use of a waste product that would otherwise pollute. A 2016 Colorado Energy Office report says there are more than 30 mines across Colorado with excellent methane capture potential.

Chris Caskey, founder of Delta Brick and Climate Company brings technical and engineering support to the coalition. “There are gassy coal mines all over the country, and that gas is leaking out every day. It’s a huge source of climate pollution. I would like people to get that gas and keep it out of the atmosphere.” The coalition hopes that their efforts could be a catalyst for similar projects around the country.

A 2017 EPA report found that of over 500 abandoned coal mines with methane capture potential, there were 79 mines of highest potential, including the mines near Redstone. West Virginia has the most mines in this group, at 22.

The coalition encourages any potential stakeholders to connect by reaching out to CORE.