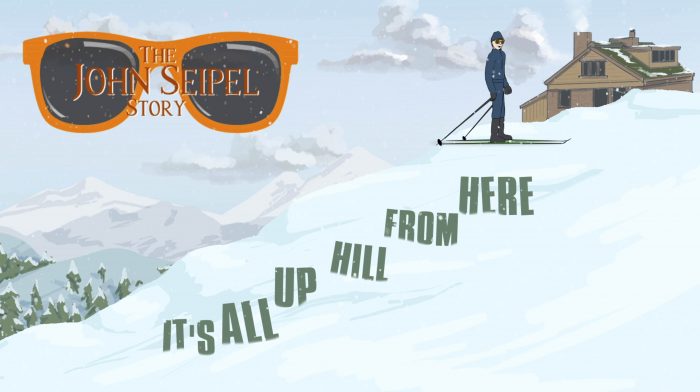 “We have finally arrived at the next chapter in this four-year saga!” So began an email from Carbondale filmmaker Hamilton Pevec to The Sopris Sun about the upcoming premiere screening of his film, “It’s All Up Hill from Here: The John Seipel Story,” scheduled for Feb. 24 at The Arts Campus at Willits (TACAW) in Basalt. The showing will benefit the local Huts for Vets (HFV) organization.

As hinted in his comment, Pevec has been involved with this film for several years. The project was the subject of a story last May in The Sun, which described his documentary about Seipel, who built five of the huts in the 10th Mountain Division Hut Association system, and the April 2019 backcountry ski trip that Seipel and several companions took to revisit the huts.

Last May, Pevec had anticipated that the film would have its “unofficial” premiere at the end of the summer. “Then the [Delta] wave of COVID came, everything got canceled and we were no exception,” he explained.

The postponement turned out to be beneficial, however. “It was helpful to have that extra time” to work on the film, Pevec noted. He received useful advice from several people, including past and current members of the 5Point Film staff. Feeling stuck while trying to finish the film, he reached out to his mentor, who said, simply, “You figure it out.” And he did.

With the screening date looming, he had to get it done. “I needed to lock the video (finalize the length in order to get the audio synchronized.” When asked, he said, “Officially, it was done last week [beginning of February]. I work better with a hard deadline.”

The film’s length has been an issue. Pevec explained last year that he wanted to get it down to 20 minutes or less, calling that the “festival cut.” That remained a challenge; the final version clocks in at more than 24 minutes. There is also a longer “director’s cut” created for the project’s participants and others who might be interested.

The connection with HFV dates back to the film’s conception. Bristlecone Mountain Sports in Willits has been one of the major supporters of Pevec’s project. As he put it, “It was [co-owner John Charters’] idea to do the fundraiser for Huts for Vets.”

Charters said that his father and father-in-law are both veterans, as is his friend, HFV founding board member Dick Merritt, and that Bristlecone has been doing “our small little part to support the vets” since he and his partners acquired the store in 2017. In addition, he noted, “The film lines up with our purpose of getting people into the backcountry.”

Erik Villaseñor, HFV’s program director, coordinated the Feb. 24 event with Pevec and helped design its poster. He explained that although HFV’s program operates only in the summer, the film is “right up our alley” in its focus on the 10th Mountain huts. HFV uses the huts for its “unique wilderness therapy program [for veterans] who have suffered trauma as a result of their service.” Villaseñor added, “We couldn’t do our program without the 10th organization.”

In addition to raising funds, Pevec anticipated that the screening “should generate some hype. It appeals to several communities: veteran, film, hut and uphill skier.” And he hopes that the film festival community will “give [the film] more serious consideration.”

He noted that the 5Point folks “have been really helpful and generous with the process,” contributing “good advice about total running time and music.” He hopes that their interest will help get the film into this year’s festival in April, observing that it is more than just an adventure film. “It’s a character piece about John and his humorous wisdom.”

Pevec entered the film in several statewide festivals and has already been accepted at two: the Front Range Film Festival, which ran on Feb. 19 in Longmont; and the Docuwest Film Festival, scheduled for mid-March in Denver.

In addition to the marquee feature, three other short films will be shown on Feb. 24, including an overview on HFV and its mission and another (courtesy of the Aspen Historical Society) on Camp Hale (a training site for 10th Mountain Division troops during World War II).

As Pevec put it in his email, “The story here is about honoring veterans … The huts are used to help vets overcome their own trauma, via HFV and other organizations, and [this screening] will raise money for that important effort.”

Members of the 2019 hut expedition team — including Seipel, film producers Nick Cherney and Shawn Gallus and Seipel’s daughter Carrie — will be on-hand for the premiere. Doors at The Contemporary open at 5:30 p.m, with the program beginning at 6:30 p.m. Tickets are available at www.bit.ly/UpHillfromhere