Ps&Qs: Of monsters and men 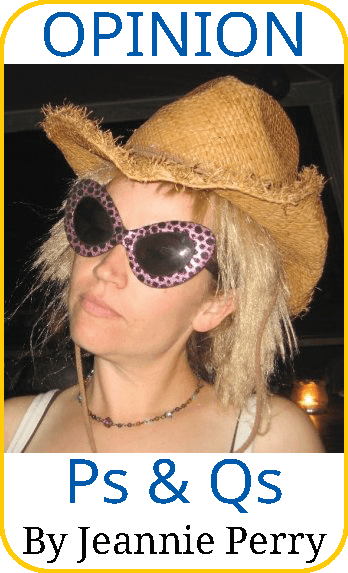 Picture this: Cookie Monster sitting on a park bench looking out at the horizon and the thought bubble over his head reads: “Without my cookies, I’m just a monster.”

That meme is exactly how I would describe politicians like Lauren Boebert; politicians who want to take away certain inalienable rights from their own constituents. I call them RAWR: Republicans Against Women’s Rights. And I have a word of caution for these “pro-lifers” who are packing in public: tread carefully when it comes to government interference in the rights of the individual.

The other end of the spectrum is just as terrifying as women bleeding to death while trying to abort with a coat hanger — it is dystopian to the nth degree. Imagine if the government, in an effort to solve our biggest issue (overpopulation for those of you playing along at home), decided to mandate abortion after one child per family.

Sounds barbaric?! Well, that is how the RAWR sound to me when they try to relate bible verses with real life healthcare issues — not to mention, an issue that is none of their business, the autonomy to decide what is best for our individual bodies. We won’t let emergency room doctors take organs out of a dead body in order to save a life (without consent), but now the Supreme Court will force a woman to risk her own life for an unknown outcome. It is hypocritical, to say the least, and not pro-life so much as anti-liberty.

Why should a group of elderly misogynists (some of whom can’t even get pregnant) be deciding our future? They are no longer in their prime and obviously out of touch with the needs of our country.

I would like to live in a society that values and trusts its individuals. A society that doesn’t thwart our own self-care. A society that walks the talk and protects everyone’s freedom. So, I have a plan to get these old guys to retire. I think the secret service should fake Joe Biden’s death. Whether of COVID, or a rock-star-style plane crash, or choking on a cookie, it doesn’t matter, if they think Joe has gone to Valhalla, maybe they will take stock of their own lives and go sit on the porch to reminisce with a cold glass of lemonade.

I don’t mean to blame all the Baby Boomers for the state of our lives (and planet) right now, but if the implant fits… Joe is our fifth Boomer president and I, for one, would like to see someone under 70 apply for the job.

I can’t remember another era where the spotlight followed one generation throughout their entire lives. It seems like the baton was usually passed on by now, but at this rate it looks like we’ll go right from Boomers to Millennials. Which is fine, because as I’ve said before, GenXers are okay with not being in the limelight. We’re used to being ignored, sometimes even preferring the privacy it affords.

And trust me, it won’t be hard to coerce GenXers into retirement. First of all, we will each have our own wing in the assisted living center because of the rate at which we are now building them for the Boomers. Plus, by then the Millennials will have dialed in virtual reality headsets enough to keep a GenXer entertained for days on end. All they will need to do, in order for us to wholeheartedly embrace the artificial intelligence staff, is to make them look like muppets.

Which reminds me of my original point: live and let live and try not to be a monster. As a society, we all make concessions to coexist in peace. For example, I agree not to take LSD and follow Boebert around with a cowbell, ringing it loudly every time she opens her mouth. In return, I expect her to actually read the constitution before proselytizing her fanatical fantasies about church and state.

Because if we are going to be a country based on personal liberty and freedom, then we can’t cede control of our own selves to a bunch of old women-haters who will not protect our sovereignty. #AbortTheCourt