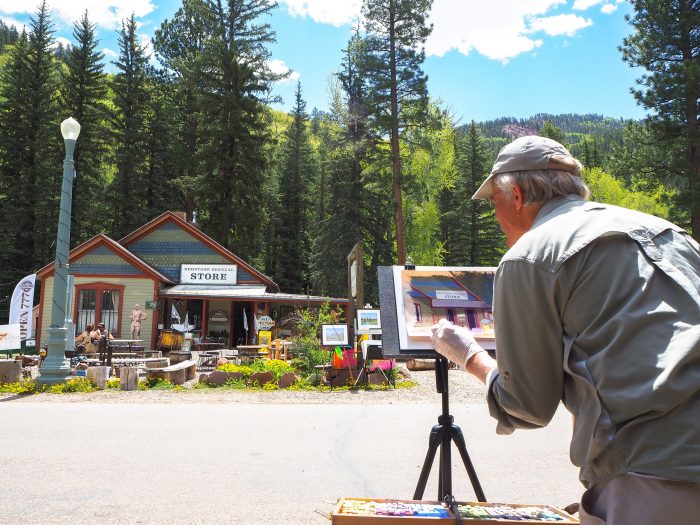 “Redstone folks have been wonderful hosts, the town is very supportive. And everywhere you look, there’s something to paint.” Missouri Heights artist Doug Graybeal summed up the Redstone Art Foundation’s First Annual Plein Air Paint Out: “It’s a painter’s paradise.”

Amid drifting clouds, blossoming trees, and a dance of fluffy cotton like gently falling snow, eight artists participated in this year’s inaugural event. For three days, they hauled their supplies to commune with the wild beauty of remote places: beneath idyllic red rocks, beside the raging Crystal River, and absorbed by the mystic tranquility of what prospectors once called “The Valley of the Marble Dome.”

On Saturday, May 29, the artists sold their works at different locales throughout Redstone proper. According to one organizer, Becca Trembly, Redstone “has always tried to be an art colony.” With bright colors decorating the boulevard, cheerful faces far from cellphone reception, and even a blacksmithing demonstration in front of the General Store, Redstone appears to have met that aspiration.

The Plein Air Paint Out concluded on Sunday with a “quick draw”, challenging anyone and everyone to register and compose an original piece within three hours to auction that same afternoon. Half of the profits for each sale went directly to the artist. The other half raised funds for the Redstone Art Foundation’s Jack Roberts Scholarship, helping local students pursue a higher education in art.

As performance painter Marcel Majid Kahhak informed spectators, “What matters most is creative reality.” Borrowing from nature’s creativity, Kahhak playfully evoked the impression of jutting red cliffs above lush, riverside flora. His surroundings informed the canvas as only an open sky can do, whipping winds and all.

Thus begins Redstone’s summer season, with tremendous enthusiasm. The Magical Moments outdoor concert series is slated to return on July 10 with Moors & McCumber performing behind the coke ovens at 6 p.m.

Meanwhile, some of the paintings produced during the Plein Air Paint Out are now on display at The Launchpad in Carbondale.