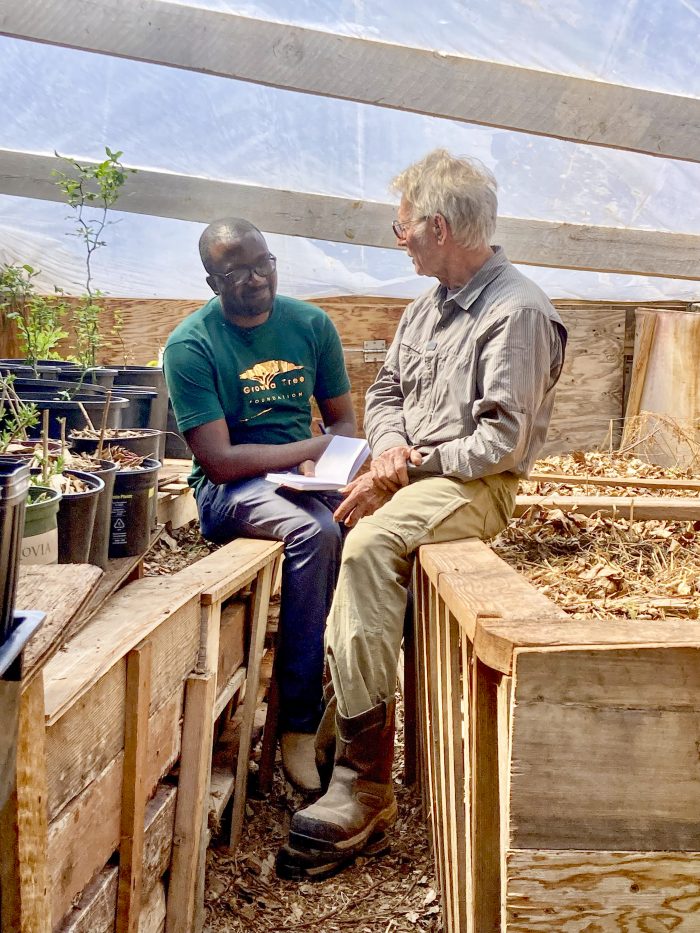 Defining “permaculture” in his own words, Kudakwashe Manyanga said, “In my country, we have what we call ‘farming God’s way.’”

The season of life’s renewal was pulsating at the Central Rocky Mountain Permaculture Institute (CRMPI) as we gathered to watch two humans, consumed by their life’s work, learn and share stories of regeneration — literally trying to save the world, one small act after another.

Manyanga is an Eisenhower Fellow visiting from Zimbabwe, where he coordinated research for the Department of Climate Change Management within the Ministry of Environment, Water and Climate. Online, his Eisenhower profile reads like a parable: a government official traveling the countryside is so inspired by the unexceptional but stable financial success of a farmer with just five mango trees, that the official changes his own life.

With the farmer’s permission, Manyanga gathered 5,000 seeds from fallen, rotting fruit to grow mango tree seedlings back on his own farm. From those first trees, Manyanga’s Grow A Tree Foundation (GAT) took root. GAT has planted 12,000 fruit trees since, with a target of five million by 2035.

Sights set, Manyanga lept when the program announced international fellowship opportunities addressing climate change. Eisenhower Fellows become part of a global network bringing “together innovative leaders from all fields and regions of the world, women and men of notable achievement who have the potential to do even more.”

Manyanga’s fellowship project applies permaculture concepts to social ecosystems. He aims to create a network of climate-smart villages among Zimbabwe’s 10 provinces. He reached out to Eden Vardy, founder and executive director of the Farm Collaborative, who was a 2021 Agriculture Fellow.

“I visited policy makers, farmers and community leaders in France, to learn what France and the E.U. are doing to support the next generation of farmers and ranchers entering the field,” Vardy shared.

On May 6, he paid it forward, introducing Manyanga to innovators in the Roaring Fork Valley, starting at CRMPI with its founder, Jerome Ostenkowski. Lunch was in the home of Rocky Mountain Institute founder Amory Lovins. And the day concluded with a visit to the Farm Collaboration with Aspen’s Mayor Torre in tow.

Gazing across a CRMPI greenhouse, Manyanga asked about pests. Ostenkowski explained how working with nature restores a balance. What looks like chaos to traditional “grow in rows” vegetable farmers is actually a complex, interconnected web of life and death, decomposition and fruiting.

Leaves from the mountain forest mulch the raised beds and provide habitat and fodder for earthworms, sow bugs and other soil-building creatures, while slowing evaporation. Tender shoots of basil are nestled in against cold nights. A tower of kale in flower looks feral, but actually attracts and supports early season pollinators. It will go to seed soon, to be saved and planted for the next round. Chard, still growing from last summer, has enormous leaves, the tougher of which will be fed to the rabbits. The rabbits multiply quickly. They eat garden scraps, provide meat for eating, manure for compost and companionable connection throughout each day.

“The first thing we work on in Africa is changing the mind. We were taught to spray and spray. Chemicals,” Manyanga said, shaking his head.

Ostenkowski next showed Manyanga tricks to increase diversity, tricks to turn losses into wins, even tricks to trick climate. Manyanga took more notes, but mostly just listened, as effective leaders do. At the end of the tour, he shared some of his own thoughts.

“Permaculture is an integral part of climate change solutions, both adaptation and mitigation, for two reasons,” he said. “The first: it is harmless. Unlike other innovations, it doesn’t create negative impacts at the end of the day. So, it is more sustainable. Second, it blends well with indigenous knowledge systems, especially for us in Africa … knowing the importance of ecosystems, how all systems are important, interacting together.”

He continued, “Permaculture is gaining traction for obvious reasons,” noting rising costs in agribusiness and increasing issues around nutrition and food insecurity. “Permaculture is cost effective, uses less water and less energy in the face of more droughts and the climate effects disrupting the African way of life.”

Manyanga concluded, “I really urge policy makers and global leaders fighting climate change to look into low hanging fruits. In particular, look at climate-smart interventions like [permaculture]. More often we look at very big ideas — big machinery. We forget there are small, effective interventions that are critical, that help communities become more adaptive, and that blend well with nature.” For example, one farmer and five mango trees.