Opening the door to outdoor accessibility 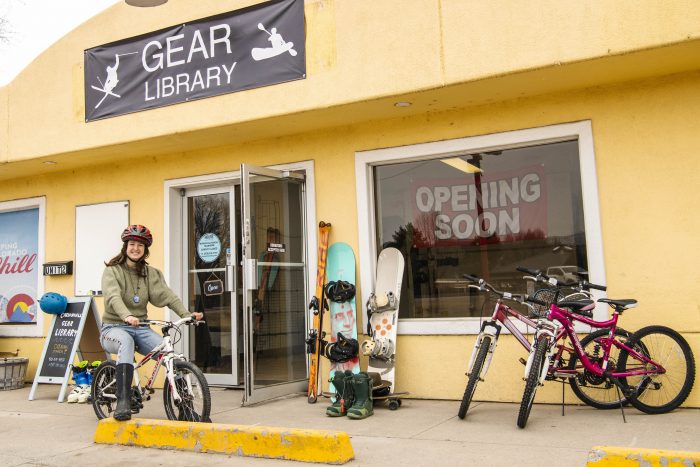 The Gear Library (opening soon) indulges many sports for enthusiasts both big and small, as demonstrated by founder Olivia Lewis. Photo by Paula Mayer

In 2021, over half of all Americans participated in some type of outdoor recreation, according to the Outdoor Industry Association’s (OIA) annual recreation trend report. Although this number has been steadily increasing since the pandemic, the OIA also found that there is a consistent and significant lack of diversity in outdoor recreation, and one reason is clear: financial inequity is keeping many people off the trails.

Originally from Virginia, Lewis moved to the Valley a few years ago and began working as a landscaper and hemp farmer alongside her friend and Roaring Fork Valley-native Kyle Watts. The pair became deeply familiar with the Valley’s most infamous dilemma: finding a way to afford living here, while still finding the time to enjoy living here.

“The main reason so many people live in the Valley is so they can enjoy the outdoors,” Lewis said. “It’s such a beautiful area and there’s all this accessible recreation, but the cost of living is so high in the Valley that once people pay their bills they aren’t always able to buy the gear to engage in outdoor recreation.”

After juggling multiple jobs and working 80 hours per week, a chance opportunity for a career change presented itself to Lewis by way of local private donors. Taking a leap of faith, Lewis decided to heed the call and is now set to open the Gear Library to the public, alongside Watts, on March 1.

Operating like a traditional library, the Gear Library allows people to set up free accounts and borrow gear free of charge for up to one week. There are no waitlists at the Gear Library, which means all gear is borrowed on a first come, first served basis.

If an item is late, a fee will accrue until the item has been returned or the cost to replace the item has been fulfilled, according to Lewis. In the event of damage, she said they will work with the borrower to reduce financial stress.

“If something gets damaged in the process, we’ll try to fix it. We’ll do our best,” Lewis said. “If it’s an honest mistake and they bring it back, we’ll do everything we can to avoid having them pay too much of a fee to replace it.”

Recognizing that there are many ways to enjoy being outside, Lewis and Watts plan to offer the public a little bit of everything.

Currently, the Gear Library is focusing on gathering seasonal equipment such as stand up paddleboards, camping gear, fly fishing rods and clothing, climbing gear, hiking boots, adult and kid bicycles, birdwatching binoculars and traditional sports equipment for soccer, tennis and skateboarding. Lewis added that they are still accepting winter gear donations such as sleds, skis, snowboards and boots for the remaining few weeks of winter.

For people interested in donating their extra gear, Lewis asked that these items be gently-used, pre-inspected for damage and dropped off during business hours.

Lewis emphasized that all gear will be heavily scrutinized to ensure borrowers’ safety. Additionally, equipment for high-risk sports such as climbing will ideally be donated by speciality businesses.

Considering the risk involved with many outdoor sports, account holders will have to sign a liability form when borrowing equipment.

“If you do go skiing and snowboarding, you should understand there is a risk associated with that — like all outdoor activities. Paddleboarding can be dangerous, whitewater rafting can be dangerous. We want people to sign off that they are aware of the dangers and are going to be responsible for themselves and the safety of the gear,” Lewis said.

While the risks of outdoor recreating are evident, Lewis does not want that to deter people from trying something new. Borrowing gear, she said, can help people decide if they want to pursue a certain sport before they fully commit.

“The idea of the Gear Library is to help people in the Roaring Fork access gear without spending too much money on rentals, or having to buy it,” she added.

Regardless of who you are or why you want to borrow gear, the Gear Library is for everyone.

“That’s visitors, people who don’t live here, people who are locals, people who lived here their whole lives, children, adults, everyone,” Lewis said. “No matter how much money you have, this is something everyone can go to, have equal access, and check something out.”

The Gear Library is currently accepting donations from 10 a.m. to 6 p.m. Tuesday through Saturday. Interested borrowers can visit www.libraryofeverything.com or call 970-319-7157 to learn more about what is currently available.