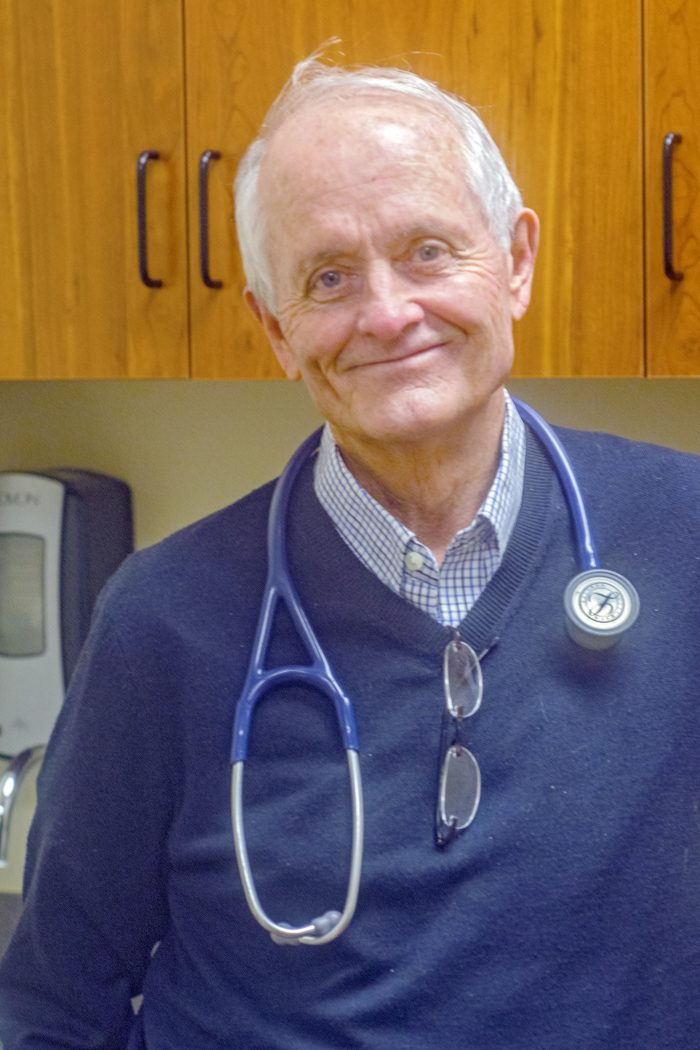 While he's not given to nostalgia, Dr. Knaus will certainly miss some of the job. “I consider a lot of people more friends than patients in a lot of ways, and I hope they feel the same,” he said. Photo by Will Grandbois

As he sees his final patients, Dr. Gary Knaus isn’t one to romanticize the past. Sure, he has many fond memories from his 43 years practicing family medicine in Carbondale, but he also remembers each bad prognosis, personal struggle or mental health issue the era didn’t equip him to treat.

“You were sort of doing everything, and you always went home wishing for the skills to help that person with that problem,” he explained. “It’s really a team-based model now, with expanded support. Only about 10% of health problems are medical. It’s about genetics and habits and social determinants. So we’re trying to address all those things and you need to build a different organization to do that.”

It’s a far cry from the kind of medicine Knaus first studied at Colorado State University — much less practiced at the naval hospital in the Hotel Colorado, where he was born, or by his father, a longtime veterinarian in Rifle. But he wasn’t looking for a profession that was static or simple. “It was really hard in medical school and residency, but you were learning so much every day that it didn’t even seem like a job,” he noted.

He also had the support of his wife, Jill, both in school and for their move to Carbondale, where she taught and he joined Tri County Medical Center (now Roaring Fork Family Practice).

“Coming to a small town and doing this, it’s a partnership,” he observed. “I call her the brains of the outfit — she keeps things going. And she’s just superb in her own right, in so many ways.”

Family medicine was a bit more modern than traditional general practice, but it was still a small-town outfit, complete with baby deliveries (which they don’t do anymore) and house calls (which they sometimes still do). “We were at the hospital every day and on call every other night,” Knaus recalled. “We worked hard and really felt like part of the community.”

Of course, the community itself has changed along with the medicine — an influx of the affluent and retirees, a significant Latinx population, and certainly fewer smokers. “So it’s a different makeup, but the same in human condition,” he said. “The town has a lot of resiliency in reinventing itself.”

And while he has families that he’s cared for for five generations, it’s still always something new.

Certainly, COVID had a tremendous impact on the industry, and may have delayed his retirement by a year or so.

“It has been the most fascinating, stimulating, frustrating, maddening, satisfying thing. It’s bizarre. It’s sad because you lose friends and see people get sick that didn’t need to get sick. It’s sad that something scientific has to be political,” he noted. “It has been a model for integrating lots of different organizations and efforts. There’s lots of people doing wonderful work, and everybody was all hands on deck. We’ve learned so much that is going to apply to how we deliver medical care in general for the next 10 years.”

But now it’s truly time, and his patients will have to see someone new in 2022. His son, Chad, is also a doctor at Roaring Fork Family Practice, while his daughter, Megan, is a Physician’s Assistant at Mountain Family Health.

But there are also plenty of docs to choose from outside the family. “We’re all of the same mind. We’re all committed and talented. We have the same training and philosophy,” Knaus said. “We all have different styles, and you need to find somebody who fits your style.”

And Knaus himself is still on the board of Valley Health Alliance and plans to stay involved with some of the systems work he’s been integral to at Roaring Fork Family Practice. “We’re just in a great spot,” he said. “We’ve got great people and I think we’ve been on the forefront, locally and nationally, for pushing the envelope and innovating.”

Don’t worry; he also plans to take some time for other endeavors.