A conglomerate of professionals from various local environmental groups recently took a tour of methane flaring and electric-generating facilities near Somerset. A similar operation has been proposed for the old Coal Basin mine near Redstone which continues to emit methane into the atmosphere. Photo by James Steindler

The Crystal Valley may be a small part of the world, but its issues carry great significance, and passionate participants reverberate down through the Valley to Carbondale and beyond. The prized corner of the world counts on a community primed for solutions.

The serene river and mountainous landscape — not to mention the Crystal Mill — entice visitors from here to Timbuktu, sometimes to snap an “Instagram selfie” and leave (too often with a trace). Environmental organizations, such as the Crystal Valley Environmental Protection Association (CVEPA), have made it their mission to protect the land and the river. Such groups continuously work to quell the impacts of human activity in the Valley.

One dilemna currently at the forefront of the political mix is that of the Lead King Loop (LKL) — a Forest Service route which has seen an extensive increase in traffic in the past decade. Off-highway-vehicle (OHV) users make up the most significant portion of that increase. The subject of OHV use has been a hot item on local governments’ agendas, particularly those of Marble and Gunnison County.

While there is undeniably an economic benefit to increased tourism, many participants see the need to balance that payoff with prudent management. One stakeholder is Ryan Vinciguerra, the mayor of Marble and part-owner of Slow Groovin’ BBQ — a staple restaurant in the town. Vinciguerra was not available to comment in time for this story.

Back in 2018, the LKL Steering Committee was formed to confront growing OHV use. That committee is made up of representatives from several agencies, including the town of Marble, Gunnison County, the Forest Service and Colorado Parks and Wildlife.

Since the formation of the steering committee, there has been limited progress. Gunnison County committed to dispatch a deputy more regularly to the area, and the Forest Service has likewise increased its presence on the loop. Still, comprehensive solutions, such as instituting a permit system, have been elusive.

Recently, organizers have begun to pursue another approach. The Center for Public Lands at Western Colorado University is facilitating “listening sessions” where the public is invited to lend their thoughts.

The first listening session took place on Dec. 8 at the Marble Firehouse. In sub-groups, attendees came up with a list of terms which they felt were pertinent to the issue. Later, the working group is expected to synthesize the terms to analyze the public’s varying perspectives and where some sentiments may intersect.

The facilitators already had a list of terms to start out the session, these included: respect, quiet, parking access, enforcement of rules, soil health, wildlife habitat, space for all users, education for recreationists, cultural heritage, trail maintenance, public access and water quality.

Following the listening session, the organizers will write a memo to the working group and include the rest of the terms that were thought of on Dec. 8.

The working group is due to meet for a “stakeholder workshop” before the end of the year. Additional public listening sessions will be held after the start of the year, followed by another stakeholder meeting.

Chris Cox grew up spending the summers with his grandmother who lived near Crystal City — a ghost town today, east of Marble. He is now looking to develop land he owns in the area as part of the Treasure Mountain Ranch (TMR) resort. The developer intends for the resort to be 100% carbon free — hydro- and possibly solar-powered.

While an application has yet to be submitted to Gunnison County for the project, the neighbors in Marble already have plenty to say about it.

Cox and his partner on the project, Stuart Gillespie, made an appearance at the Dec. 9 CVEPA board meeting at the Carbondale Library. Cox said he attends such meetings because he wants to be transparent and quash any myths about the project.

While most attendees at the public meeting were prone to listen and ask questions, others were not. One spectator plainly stated to Cox, “We don’t want you here.”

According to Gillespie, the project would take five years to complete, with four cabins built each year. The developer duo further stated that they intend to mill their own lumber for the cabins. They also plan to guide ski trips on Forest Service lands, which will require a special-use permit.

Gunnison County issued a “Notice of Violation and Stop Work Order” to TMR on Nov. 1 due to unpermitted improvements made to old roads on the developer’s property. According to the county’s director of community and economic development, Cathie Pagano, the violation is still outstanding and “the county does not process permits for an applicant while there is an outstanding violation.”

According to Gillespie, they are planning on submitting the major-impact land-use change application to Gunnison County in 2022. 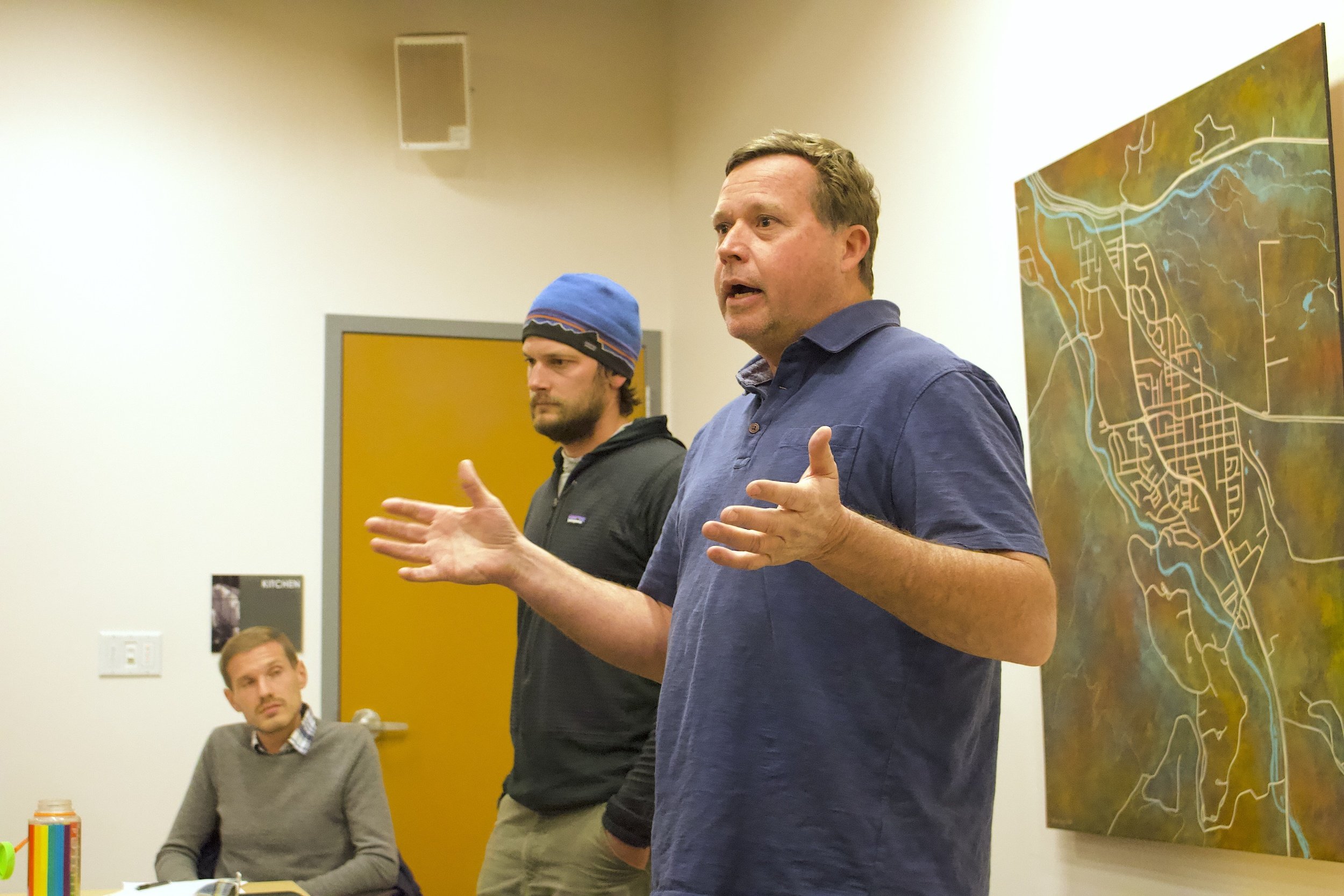