CPW agents place one of three tranquilized cubs in a den prepared for them in southeast Colorado, January 2019. CPW transported the animals from a licensed rehabilitation facility for reintroduction to the wild. Photos By Mike DelliVeneri, courtesy of CPW.

It’s the time of year again when bears are supposed to go into hibernation. Sometimes the long journey back to what should come naturally for them starts in Silt, at the Pauline S. Schneegas Wildlife Foundation (PSSWF). Director Nanci Limbach, who named PSSWF for her wildlife-loving grandmother, is one of about 20 rehabilitation specialists licensed in the state by the Colorado Parks and Wildlife (CPW). Bears transported by CPW to PSSWF begin the slow process of rehabilitation when bears are briefly tranquilized to have blood work done, and “get tagged, micro-chipped, de-wormed and checked for parasites,” says Limbach, who has been rehabilitating wild mega mammals like bears and mountain lions since 1984.

“Rehabilitation is considered successful only when an animal is healthy enough to be released into the wild,” says CPW Wildlife Manager Kirk Oldham, who is based in Grand Junction. He has often brought injured or starving bears to PSSWF. “We are not saving animals that will not be well enough to survive [in their natural habitat],” says Oldham. “Rehabilitation facilities are not zoos.” Animals that CPW determines won’t make it on their own must be euthanized.

Since starving bear cubs are the ones most frequently brought in for rehabilitation, the last requirement before they can be returned to the wild is that they have eaten enough food at PSSWF to weigh about 60 pounds. The cubs have either been orphaned or abandoned by mothers that, in their own search for food, leave their young to fend for themselves. One young animal that CPW recently took to PSSWF was found in an apple tree in Garfield County Commissioner John Martin’s yard in Glenwood Springs. It will have to winter over at the PSSWF compound, says Limbach. Healthy cubs who have a mother can hibernate with her their first year, although they can also den successfully on their own.

“It used to get cold in Silt,” says Limbach. “But now it’s 60 degrees in winter and the bears we keep here look like they’re saying, ‘Hibernate?’ They are not happy campers.”

When her grandmother died, Limbach received an inheritance that allowed her to purchase land at 8,000 feet, providing habitat well-suited for what Limbach calls “preliminary hibernation.” Another key factor essential for rehabilitation is that the area’s isolation maintains a vast social distance from humans. “It’s on the backside of Sunlight,” is all Limbach would say about the location. Avoiding humans entirely is more important than ever, because people can infect bears with COVID-19, according to CPW.

Emotionally detaching people from bears begins at the compound. The animals’ keepers have as little contact with them as possible, even in the way they are fed.  Conferring cute nicknames “like Buttons,” for instance, is prohibited, says Limbach. “These animals are wild. They shouldn’t be given names.” Individual animals are referred to by a number that is recorded.

In October, when it gets cold enough, a PSSWF team transports an animal to the site at higher elevation and releases it.  “When the bear is good and ready it will go hibernate,” says Limbach. Usually that takes until all available plant sources of food that a bear can eat are gone, or there’s a blizzard, she says. When an impregnated female’s denning cycle is natural, “all bears are born in January,” she says.

But in a managed hibernation, the next stage happens in February. CPW staff go up to the PSSWF site, locate the preliminary dens, tranquilize, remove and transport the animals to an even more isolated location. Snow dens dug by wildlife staff await, and the groggy bears are moved into them. The plan is that they wake up about six weeks later, fit for spring and having completely forgotten that people are a source of food.

Only then can it be said that a bear is no longer habituated to people. If an adult bear that was previously tagged does find its way back to a trash can, dumpster or in somebody’s kitchen, CPW returns it to the wild only one more time before it must be euthanized, says Limpach. “A tagged cub, however, is given a third chance.” 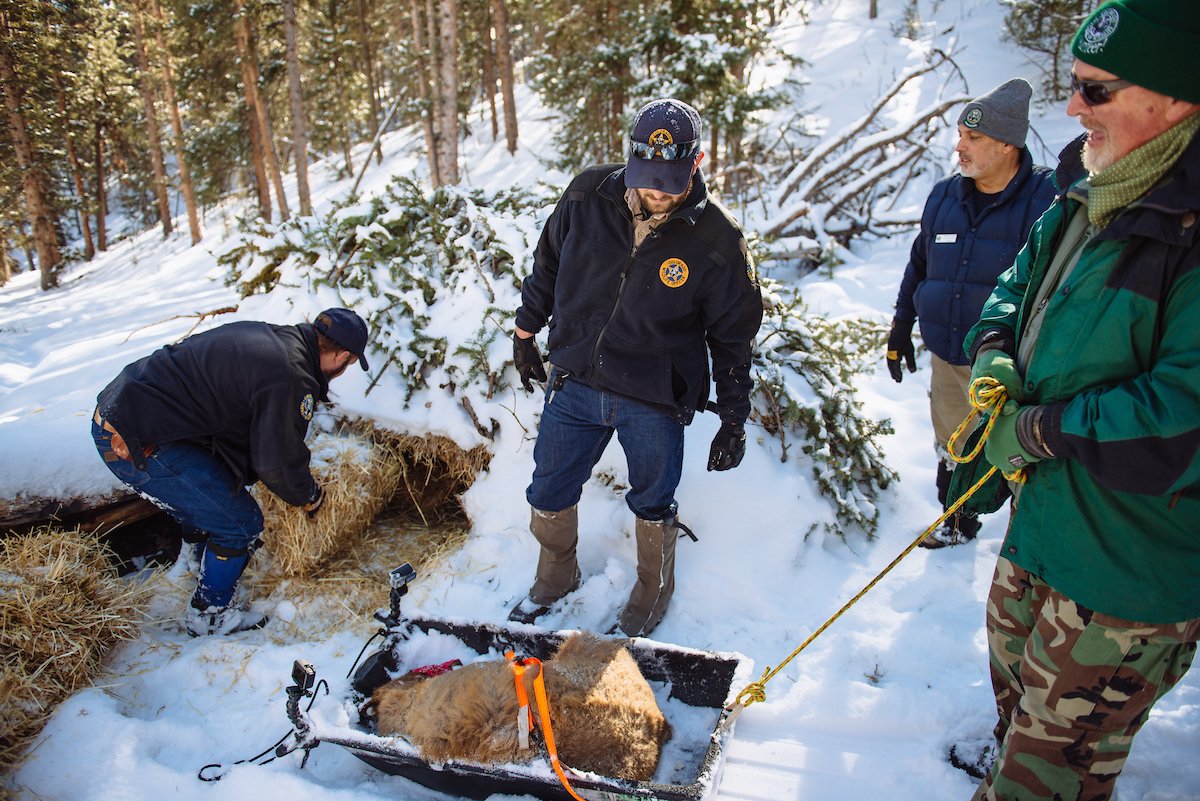 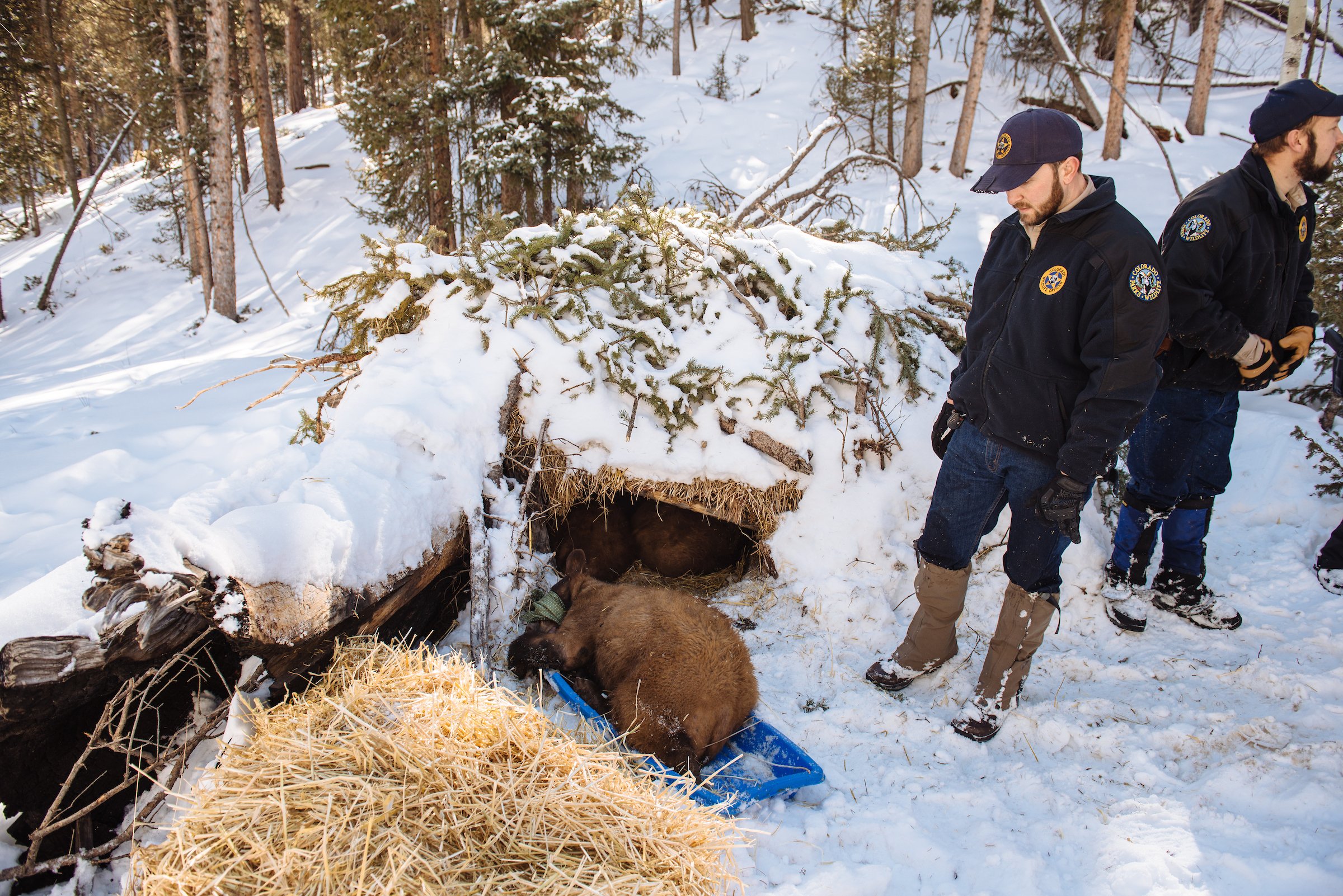