Senior Blake Thomas said, “We want to win games and want people there to support us and cheer us on.” Pee Wee football players were out in full force to do just that. Photo by Sue Rollyson.

Rams Head Coach Eric Bollock said, “There’s nothing like it, especially in Carbondale, with the beautiful backdrop of Mount Sopris.”

Bollock, a 1994 RFHS graduate, played Rams football as a quarterback and tight end. He understands what it’s like to play, in your hometown, in front of family, friends and classmates.

About this season, Bollock said, “I’m excited. We’re going to be a really solid team this year, with a lot of growth from the spring season [in 2021]. I picked up four or five new kids, and three of them are first-time football players and great athletes.”

T.J. Metheny, a senior who plays at center and defensive tackle, has been with the team for four years. He began by playing youth flag football. His younger brother, Ryan, a junior, is also on the team at left tackle. At six-foot-three, T.J. is a center in basketball and plays baseball in the spring.

“I think this season is trending to be one of the best seasons I’ve had yet — from a team of eight to going all the way to this giant team. Having all this new staff, I think it’s going to be great,” Metheny shared.

Senior Blake Thomas is playing a bit of everything, but mostly on offense as a wingback and defense as a middle linebacker. As a freshman, he played for the Basalt Longhorns.

He has skied competitively for most of his life and is a park and pipe skier with the Aspen Valley Ski and Snowboard Club. In the spring, will take on catcher duties in the Rams baseball lineup.

Thomas likes the team’s prospects this season, saying, “We’re coming in this year looking a lot better. We have a lot more new guys that haven’t played in the last year, so I think we’re going to look a lot better this year.”

Sophomore Max Bollock is the starting quarterback and knows many of his teammates from their pee wee football days, when his father, Eric, was their coach. “It is cool playing with all these kids I’ve been playing with for a little while. I played with some of them in middle school.”

Max Bollock said they appreciate the fan support as Carbondale’s football program returns. “The fans in the stands; that’s what keeps the guys going, and they love the energy of this place. I definitely think people should come out and support us. Hometown football, Friday Night Lights, varsity — there is nothing else like it,” he said. 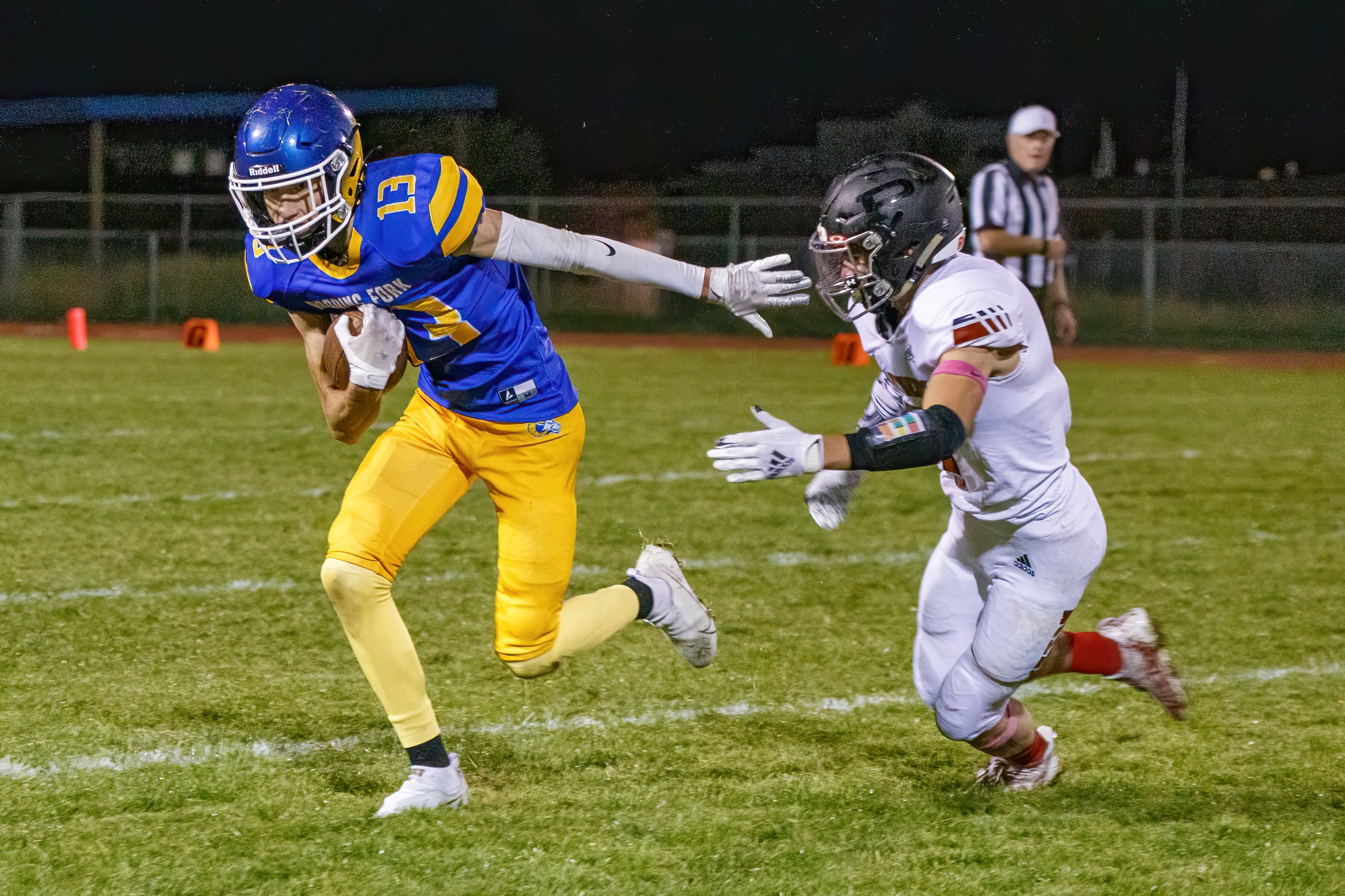 Senior Henry Richardson fends off a Panthers defenseman. Coach Bollock said a few new players “came out of the blue – so unexpected – and they’re great athletes.” Photo by Sue Rollyson.