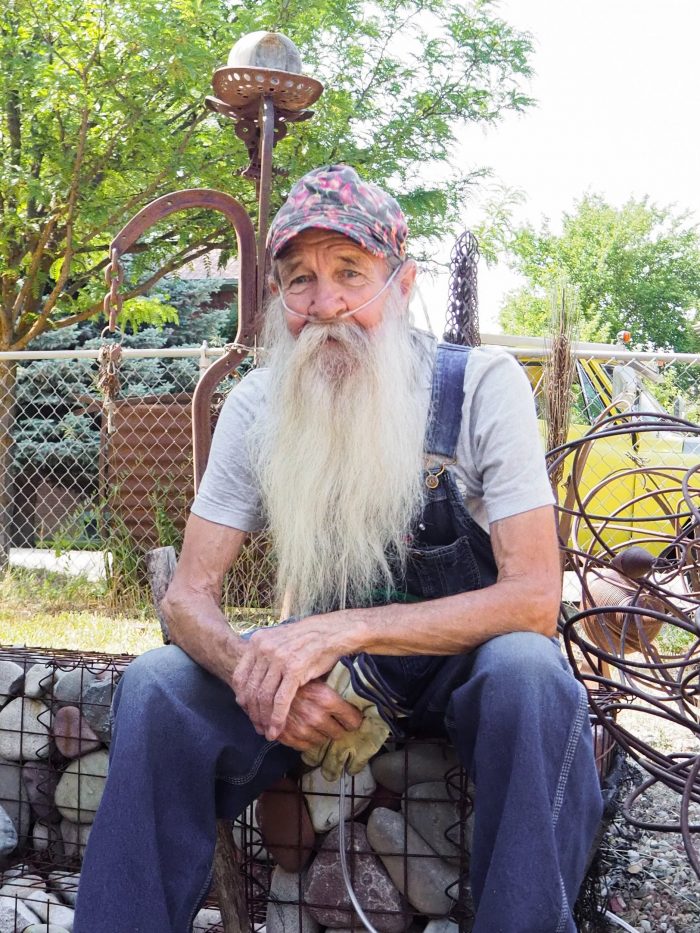 Second generation Coloradan Bill Morrow is looking to sell his remaining sculptures with an auction later this fall. Photo by Raleigh Burleigh.

“I have absolutely no fear of dying.” Bill Morrow, 75 years old, stepped inside from working on a 2002 Buick Rendezvous to join The Sopris Sun by phone. “I’m actually looking forward to the opportunity. But I can’t do it until this sculpture is gone.” Morrow refers to more than a dozen sculptures, spanning subjects, styles and sizes. They’ve been amassed over the course of four decades.

His work is well-known in the Roaring Fork Valley, lending artistic flair to many Carbondale locations. The giant “Insane-o-cycle” in front of the Roaring Fork Coop towers over Highway 133. Morrow’s caduceus, a winged rod spiraled by snakes, welcomes patients at Roaring Fork Family Practice. Pieces also rest at the library and KDNK and have sat outside of many other institutions like the Village Smithy.

The opportunity for people to acquire an original Morrow-sculpture of their own draws near, with an auction planned at the Bookcliffs Arts Center in Rifle in late-October. The property that the arts nonprofit calls home is the same where Morrow grew up.

Morrow is looking to pass along his accumulation of sculptures, “before I die,” to leave his two grandchildren with more than enough money to cover the costs of cremation. After 50 years of smoking tobacco and a stint in the coal mines, Morrow relies on trailing a cylinder of oxygen to keep him steady as he stays busy.

“I’m not going to die until the good lord is ready to take me home,” said Morrow, “and the only thing that dies is my physical body. The rest is eternal.”

Morrow is a second generation Coloradan whose father was born in Aspen in 1911. When he was raised on the property in Rifle, it was 72 acres. His father later sold all but five.

Morrow returned to live there with his family in 1993 and dreamed of purchasing the remaining acreage. He converted the farm shed into a studio, adding a roof and insulating it. However, his wife, Cindy, fell ill in 1995 and the mounting medical bills drained away their savings.

Through his ornamental iron work upvalley, Morrow scouted donors willing to help purchase the land, appraised then at $275,000. He turned to the Bookcliffs Arts Council, an established nonprofit, for the 501c3 status to process donations. His idea was to found the Sunrise Art Garden. In early 2000, two day before they closed on the property, Morrow’s father passed away. Then, in 2005, so did Cindy. Soon after, Morrow was asked by the arts council to pack up and move along.

“My life’s kind of like a scrambled egg, isn’t it?” said Morrow. “They haven’t broken the yoke yet though.”

He has always had a creative spirit. His mother kept him entertained as a child with paper and pencil and he would often draw ships.

Some years after graduating from Rifle Union High School in 1963, Morrow received a draft notice during the Vietnam War. Preferring not to be trained to kill, Morrow decided to join the Navy and spent about two years in the belly of the USS Intrepid, an aircraft carrier that had survived World War II and once returned to Pearl Harbor with a rigged sail after torpedoes took out its propulsion. Morrow worked in the boiler room and painted a mural on the ship, a floating city with 3,000 people living aboard.

After completing two tours with the Navy, Morrow worked a variety of jobs throughout Colorado. Ninety days into being a rookie police officer, he was told to enroll in the Colorado Law Enforcement Training Academy. “It sounded like boot camp,” said Morrow. So, he quit. “I already did that and didn’t like it the first time.”

Morrow worked for a fish hatchery, helped construct the sanitation plant in Carbondale and a bridge in Basalt. He managed the mobile home park next to Carbondale’s diner and built a welding and machine shop nearby. After working in coal mines near Grand Junction, he started a welding business that went bust when Exxon shut down its operations in 1982.

This spurred Morrow to sculpt. He took a truckload of pieces down to Tucson, Arizona, and returned home defeated, having only sold one. Nonetheless, Morrow kept his spirits high.

Quoting Fred Haberlein, he told The Sopris Sun, “Art is something that you do from the heart.” He continued, “You don’t do it for the money.” While living in Carbondale, Morrow routinely volunteered at the Carbondale Mountain Fair when Thomas Lawley was the director.

“We volunteered to go into the third dimension, where there’s an Earth school,” Morrow concluded our conversation. “Up and down, left and right, truth and bulls**t. We gotta struggle through it. [For me,] graduation day is coming up.”

To get a jump on the auction and purchase a piece early, or to help with organizing efforts, you can call Morrow at 970-623-4469.

Keep an eye out for more details about the auction in future issues of The Sopris Sun. 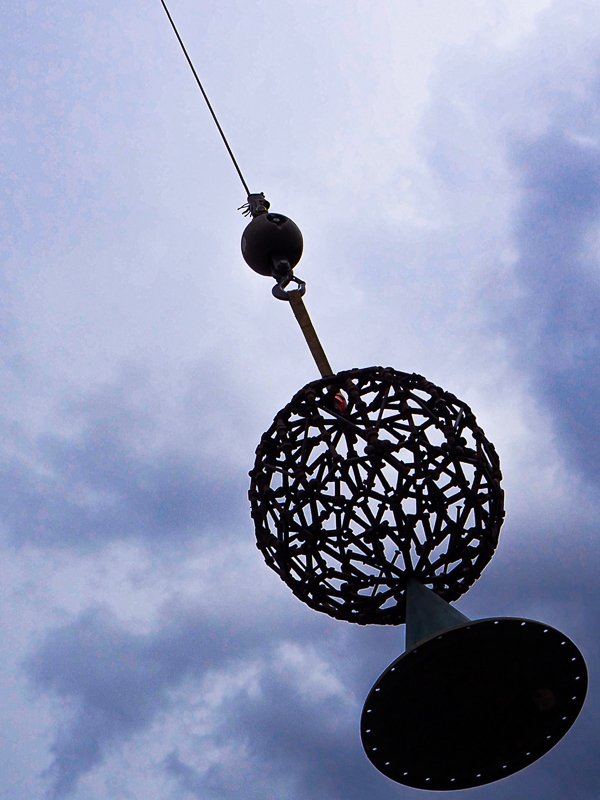 One of Morrow’s sculptures is hoisted onto the back of a flatbed truck to hopefully find a permanent home. Photo by Raleigh Burleigh.