Two organizations – Wilderness Workshop (WW) and Honor the Earth (HTE) – have a combined 80 years of dedicated service to raising public awareness and calling citizens to action for the conservation and protection of our lands.

On Aug. 12, Winona LaDuke, HTE executive director, spoke at WW’s annual fundraising event, which included a dinner and auction. A special ceremony honored Andy Wiessner with the Maroon Bells Public Lands Champion Award. Wiessner is a longtime advocate and WW board member who has worked diligently to protect public lands.

LaDuke’s visit came just three weeks after being released from spending three days in the Wadena County jail in Minnesota. She was arrested with six other women – “most of us grannies or aunties,” she said. The arrest, for trespassing, came while protesting the construction of Enbridge Energy’s Line 3 oil pipeline.

While guests at the Hotel Jerome event were decked out in chic attire, LaDuke wore the same outfit she did in jail – a long-sleeved denim chambray shirt, a long cotton skirt and a t-shirt with “We Are Water Protectors” written across its front. 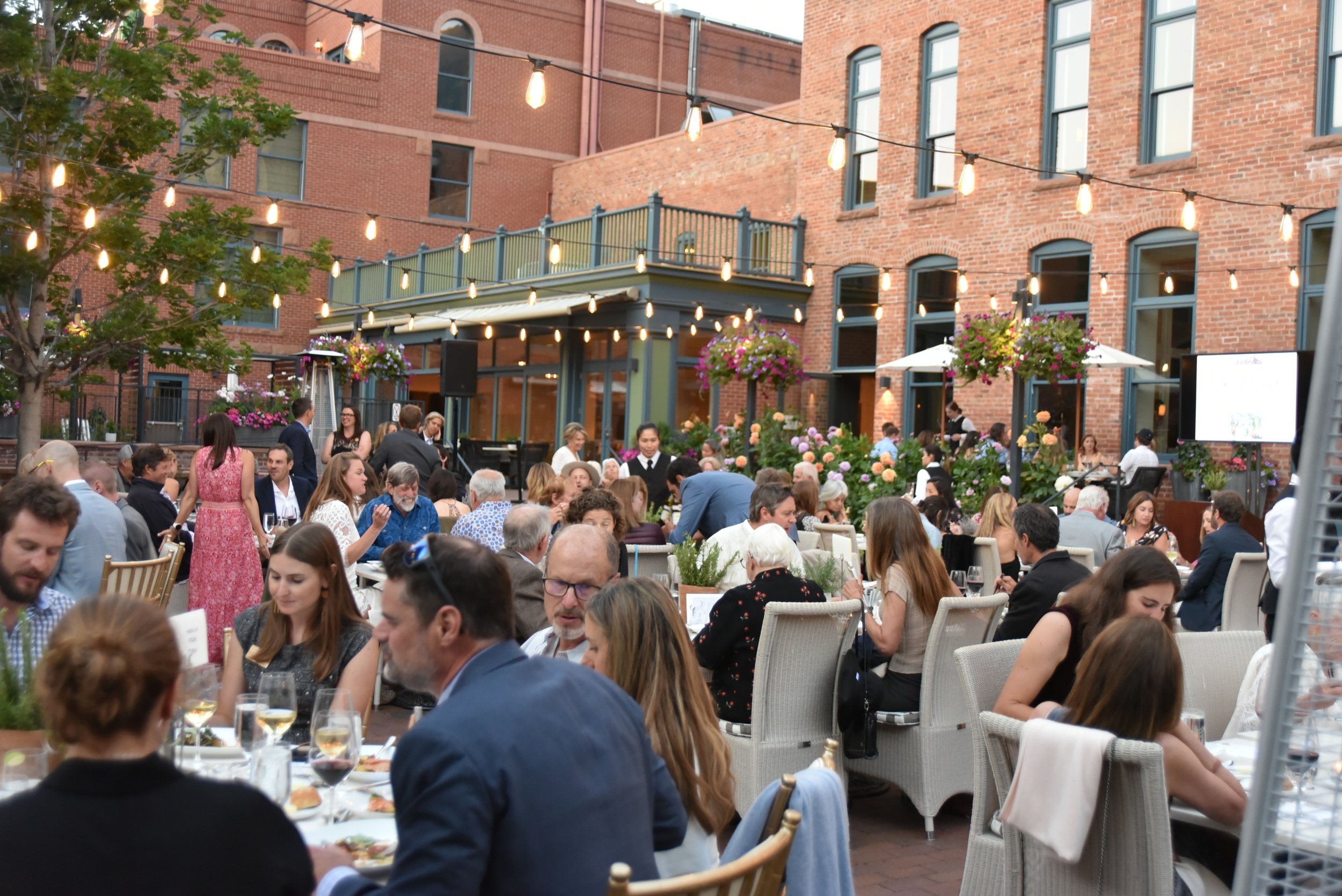 LaDuke is an enrolled member of the Mississippi Band Anishinaabeg of Northwestern Minnesota. In 1993, she co-founded Honor the Earth with Amy Ray and Emily Saliers, members of the folk-rock music duo Indigo Girls.

Known for her Native American rights and environmental activism, LaDuke was also the vice-presidential candidate on the Green Party ticket with progressive political activist Ralph Nader in the 1996 and 2000 presidential elections.

HTE has been at the forefront of organizing the Line 3 pipeline protests against Enbridge Energy, a Canadian multinational pipeline company. LaDuke, who grows corn and hemp on her property in northern Minnesota, also harvests traditional wild rice crops from Rice Lake. She said she didn’t know much about Enbridge, or tar sands for that matter, “until one day I was like, ‘What? They want to put a tar sands pipeline through my wild rice lake?’ That’s like, ‘No, you don’t get to do that.’ So that’s how we all got mobilized, and that’s how y’all get mobilized out here, too.”

LaDuke said of Canada’s economy, “They’re a petrostate. Their economy is predicated on tar sands, and Enbridge is the dealer in about 75 percent of the tar sands coming into this country — the dirtiest oil in the world comes from Enbridge.”

Carbondale-based Wilderness Workshop (WW) was founded in 1967 as The Aspen Wilderness Workshop, three years after the signing of the Wilderness Act of 1964. Like HTE, it was co-founded by three women – Connie Harvey, Joy Caudill and Dottie Fox – known affectionately as the “Maroon Belles.”

These three women, whose organizing work started around a kitchen table in Aspen, led to the legacy of securing an expansion of the Maroon Bells-Snowmass Wilderness Area.

Will Roush, WW executive director, said of the Line 3 protests, “I think there are some real parallels between Winona’s fight and ours. I want to be clear; she’s fighting a huge pipeline with massive climate impacts and listening to her talk about this idea of regulatory capture, of how the folks that are doing permits back in Minnesota feel like they’re just working, in some cases, for the industry that they’re supposed to be regulating. We’ve certainly experienced that here. A lot of our job has been to hold the federal agencies accountable and get them to follow the law as they’re regulating oil and gas. It’s critical that they work for the public, not just for the industry. So I think there’s a real parallel there.”

Investopedia defines regulatory capture as “an economic theory that regulatory agencies may come to be dominated by the interests they regulate and not by the public interest.”

What Enbridge is doing, LaDuke said, “is regulatory capture, and the Public Utilities Commission grants the permits and then the people are forced to sue, so we’re suing.”

To build the pipeline, Enbridge needs to temporarily pump groundwater out of the area. In June, the Minnesota Department of Natural Resources issued an amended permit allowing Enbridge to pump up to nearly five billion gallons of water, 10 times the amount requested on the original permit, “making it the single largest allocation of water in the history of the state, to a Canadian multinational [Enbridge], to be able to put a tar sands pipeline in, in the middle of a climate crisis. Just like crazy, It’s like addict behavior, like fossil fuel addict behavior. Who does that?” LaDuke asked.

Grant Stevens, WW communications director, said it was an approval that WW opposed. “We felt like it should have been considered under the National Environmental Policy Act,” he shared.

The test drilling of four different potential dam and reservoir alignments will assess the geological permeability of each location. There are concerns about the surrounding environment. “There will be impacts to wetlands and fens, in particular. Fens are a really special kind of wetland that takes around 10,000 years to form. What is so important about them is that they perform important purification functions in watersheds. The Fish and Wildlife Service has called them irreplaceable,” Stevens said.

Eventually, that water will be diverted to Aurora and Colorado Springs, as those cities purchased the water rights decades ago.

WW’s call to action initiative includes a “No New Dams” online petition. Stevens said there are no residency requirements for signing the petition. He added, “We’ve been reaching out to folks, as there are opportunities for events, letters to the editor and engaging with elected officials.”

Comparing their WW’s mission with that of HTE, Roush concluded, “It’s always striking to see a lot of the similarities between the work that Winona is doing and the work that we’re doing, and so much of it comes down to local communities standing up for places where they live, the issues they care about, protecting the lands around their homes. I think that’s at the heart of what we’re doing and the heart of what Winona’s doing in her work.”

There are vital elements to any solid grassroots initiative that secures a lasting and effective change: petitions, calls to action, letters to the editor and phone calls to elected officials, plus the money needed to organize and make things happen from fundraisers and donations. These have sustained WW and HTE all through 80 vigilant years of keeping watch.