Checking in at the GarCo jail 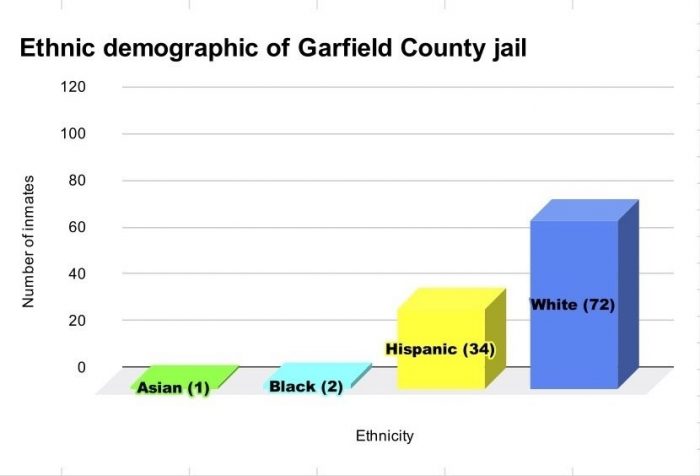 The Garfield County Detention Facility (GCDF) was built in 2001 and lauded as state of the art. According to its current management, there has never been an escape from the compound; they were quick to point out that Ted Bundy broke out of the old county jail.

Recently, The Sopris Sun was able to get inside but with some limitations which included not being permitted to interview current inmates or take photos within the facility.

In order to qualify as a detention specialist, an applicant must have their GED or high school diploma. While there is some training once a recruit is hired and throughout their time working as a jailer, they are not required to complete the police academy.

Currently, there are approximately 95 men and 10 women housed in the jail. There is only one “female pod” in the jail which houses all the women inmates regardless of their security classification.

The average length of stay for inmates is 17 days. However, according to Sgt. James Brassfield, that is skewed because it includes the countless arrestees who bond out within an hour or so of entry.

“There are no firearms allowed inside the facility for anybody,” says Garfield County Jail Commander Jim Myer, “and that’s always been the case.” When a law enforcement officer brings in an arrested individual they leave their gun locked in one of several lock boxes at the jail’s entry points. Cell phones are also not allowed within the facility with the exception of supervisors with department issued cell phones.

A detention specialist is equipped with a radio, medical grade scissors, a secondary weapon (choice between pepper spray and a taser), handcuffs and a slash-resistant vest (not quite bulletproof).

There are minimum, medium and maximum security pods. According to the Sheriff Office’s website, “at the GCDF, inmates are housed using the U.S. Department of Justice, National Institute of Corrections, Objective Jail Classification Point System.” However, some individuals housed in the maximum pod are not considered a maximum security risk on the classification scale.

During The Sopris Sun’s visit, there were 10 people in the maximum pod but only two of them were considered maximum security status.

When touring the medium pod, an inmate came up and showed Myer a drawing of Benjamin Franklin — quite an impressive one — and informed the jail commander that he wants to be a tattoo artist. Another asked Myer how much he is benching these days. The overall vibe — at the time — was peaceful and fraternizing.

When someone is put on suicide watch, they are moved to a holding cell with a reinforced glass door in the booking area of the jail where staff can keep on eye on them. Folks on suicide watch are left with a “smock,” which is heavy to prevent tearing, and a bed pad. There is no limit to the amount of time someone can be kept on suicide watch. This is left up to mental health evaluators.

Additionally, there is a safety cell which is an empty padded room with one small window looking into the mostly vacant hallway within the “transition pod” of the building. Apparently, people are put in there to “calm down,” and typically aren’t there for very long.

Rather than referring to it as solitary confinement, the jail calls it administrative segregation. It’s different from what people see in the movies. People who get on this list are generally kept in either the maximum pod or the transition pod. They get let out of their cell “when it is safe to do so,” during the day, says Brassfield and, “if they choose to,” adds Myer.

According to Colorado law, when someone is booked in, strip searches are only authorised for certain reasons — such as for habitual offenders or drug charges. Typically, arrestees are not strip searched and the jail has a body scanner to detect contraband and/or weapons.

Family and friends can only visit remotely. Recently, inmates have been given access to tablets which they can use to virtually meet with family and friends. “All of these tablets do have free features, but if you want to watch a movie you’re going to have to pay for it; if you want to do a video visit, you’re going to have to pay for it,” says Brassfield. Any communication to the outside comes with a price and every conversation is recorded, except for attorney visits which are done through a glass partition.

In terms of COVID, once an inmate is classified and booked they get a rapid test. If they test positive, they’ll have to quarantine for 10 days in a cell in the transition pod. Reportedly, there are currently no positive COVID cases within the jail.

Inmates are not given local newspapers so as not to discover information about one another’s cases. However, they do get to read USA Today.

Jail is not intended to be a nice place to live, however, according to Myer, everyone is treated with the same level of respect. “The terminology we like to use around here is ‘firm, fair and consistent,’” says Brassfield. “It doesn’t matter who they are.”